WELCOME to the debut of “The Truth Is!”, a blog of reporting and commentary that aims to be informative, thoughtful and provocative. At least initially, the blog will have a strong heartland flavor by virtue of the connection of a number of us to Cowles family journalism. I am former editor of the Des Moines Register’s opinion pages. Another contributor, Michael Gartner, is former editor of the paper; he later served as president of NBC News. Another former Register editor who has agreed to contribute, Geneva Overholser, is director of the University of Southern California’s Annenberg school of journalism. Followers of the blog will have access also to the work of Herbert Strentz of Des Moines, a close Register and other newspaper watcher who once headed Drake University’s journalism school. Bill Leonard, a longtime Register editorial writer, will add insights.
“The Truth Is!” will be supervised by my daughter, Marcia Wolff, a communications lawyer for 20 years with Arnold and Porter (Washington, D.C.). Invaluable technical assistance in assembling and maintaining the blog is provided by my grandsons Julian Cranberg, a college first-year, and Daniel Wolff, a high school senior.
If you detect a whiff of nepotism in this operation, so be it. All of it is strictly a labor of love. —Gil Cranberg

Herb Strentz: IT’S THE FEAR – NOT THE PROOF-- THAT’S IN THE PUDDING!

In time we’ll likely enjoy the orange pudding, a gift from one of our daughters.

Or maybe we can have it bronzed as a reminder of the terror-filled age we’ve inflicted upon ourselves.

Whether it’s called pudding elsewhere or fruitcake in the U.S., the folks of the Transportation Security Administration, ever vigilant to its pledge — “Your Security is Our Priority ” — opened and sampled our gift labeled “Heston Hidden Christmas Orange Pudding” at an airport in Hawaii.

Perhaps that is all part of what TSA calls its “risk-based strategy.”

The so-called risk, in this case, may have been suggested by the word “Hidden”, or maybe it was in the warning in cooking instructions that “overheating may cause fruit and sugar to ignite.” (Although about anything you pack is ignitable.) Or maybe the TSA focused on the word “frenzy”, as the pudding maker in the United Kingdom referred online to the “…Internet and media frenzy about Heston’s Hidden Orange Christmas Pudding.”

For whatever reason, when we got back home and unpacked, one suitcase had the TSA “Notice of Baggage Inspection… for prohibited items.” That particular piece of luggage had already carried a label indicating it had been searched and cleared by the US Department of Agriculture inspectors who check all baggage leaving Hawaii for the mainland. (Further, the pudding had been purchased by our daughter who lives in Australia and, after a brief stay on the mainland, she brought the gift to the Island of Kauai as part of Christmas gift giving. So it already had cleared security checks, including the TSA, a couple of times.)

Even though the USDA at Lihue Airport spotted the pudding and cleared the little box — about 6 inches square and 4 inches deep — the TSA folks slit open the box, removed the bowl of pudding, unsealed a bit of the lid and, judging from an indentation in the pudding, sampled the stuff. Maybe they restricted themselves to a taste test; maybe folks in HAZMAT suits took it to a lab for a more in-depth analysis.

Having found the pudding to be pudding, the TSA resealed the bowl with crisscrossed duct tape bearing the TSA label but lacking a celebratory “ENJOY!” [See attached photo]

But why mess with an item already previously cleared by the USDA and other TSA workers?

Even our other baggage should have been more suspect, containing as it did bottles of liquid more potent than orange pudding/fruitcake.

But that’s the nutty world we live in today. 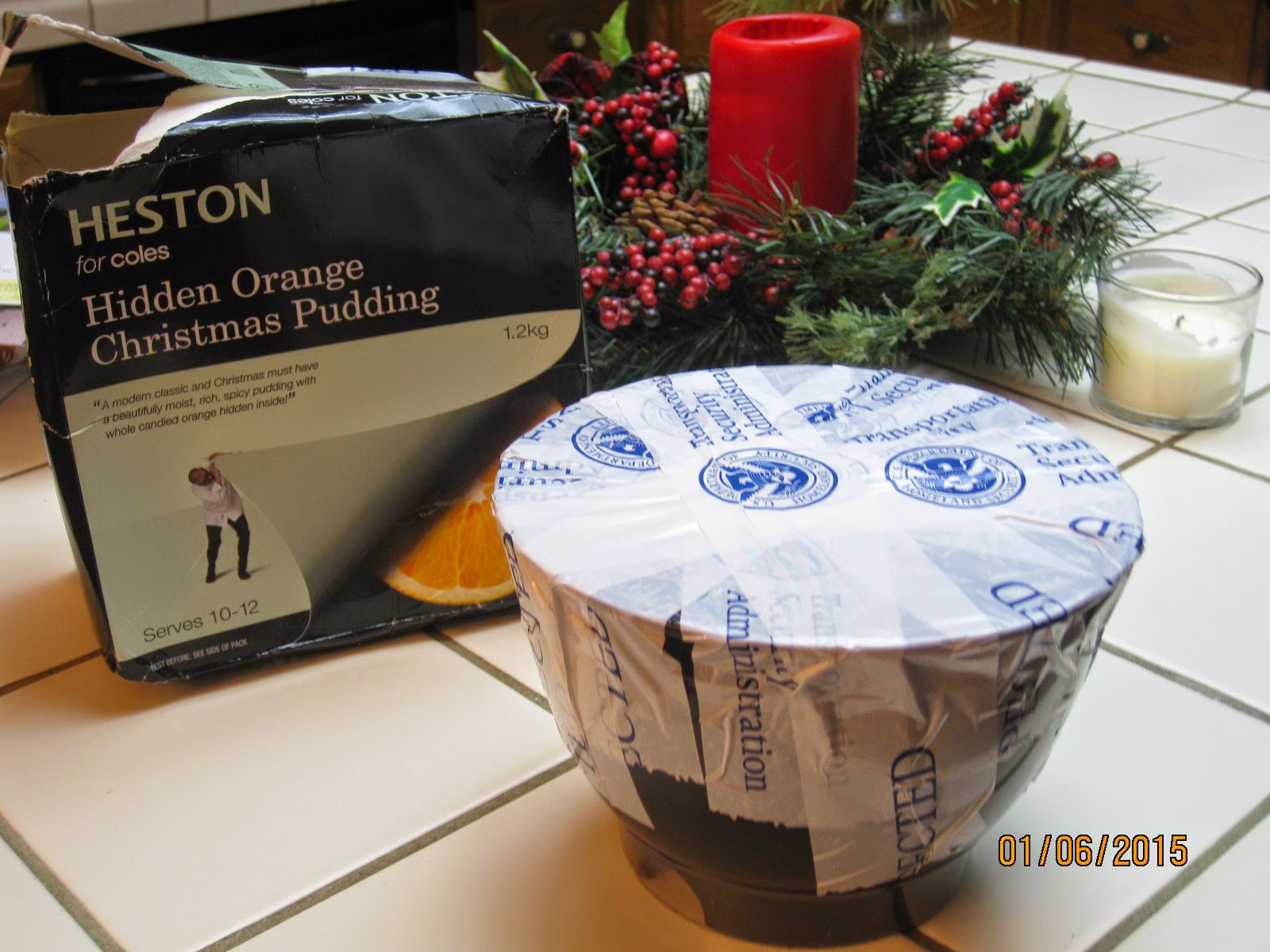 Gilbert Cranberg: SOPHOMORES AT WORK AT THE TIMES

Tankers-full of ink were spent describing the protest march in Paris attended by heads of state from all over the world. Unless I missed something, the New York Times managed to cover the event by not expending a drop of ink reporting or explaining the absence of President Obama. While in no way comparable, to this reader the performance of the paper was reminiscent of how it dealt with the deaths of millions of Jews during World War II by pretending it didn’t happen. The paper subsequently made amends for its Holocaust non-coverage by apologizing and in effect vowing never again. Except now again it inexplicably botched a major news event – President Obama’s disappearance act in Paris.

The Times’ sorry handling of the story makes a mockery of its motto, “All the news that’s fit to print”, and everyone responsible for its sophomoric performance should be disciplined.
No comments. Post a Comment
Posted by Unknown

Gilbert Cranberg is George H. Gallup Professor of Journalism Emeritus, the University of Iowa School of Journalism and Mass Communication. He was associated for 33 years with The Des Moines Register and Tribune where he was editor of the editorial pages of both papers.

Cranberg taught for 18 years at the University of Iowa's journalism school. He co- authored "Libel Law and the Press: Myth and Reality," (The Free Press) whose authors won the 1987 Distinguished Service Award of the Society of Professional Journalists for research in journalism. Another book, "Taking Stock: Journalism and the Publicly Traded Newspaper Company," (Iowa State Press), was published June 2001. He is the co-author of several law review articles on the subject of libel.

Cranberg served as chairman of the Professional Standards Committee of the National Conference of Editorial Writers and as a director of that organization. He was a member of the American Society of Newspaper Editors and of its Ethics and Values Committee. He is a life member of the National Conference of Editorial Writers for having "achieved exceptional distinction in the profession." He has written for numerous publications, including the New York Times, Washington Post, Los Angeles Times, USA TODAY, Journalism Quarterly, Columbia Journalism Review, American Journalism Review, Nieman Reports, American Bar Association Journal and Iowa Law Review.

Michael Gartner was born in Des Moines, Iowa. He received his B.A. from Carleton College and J.D. from the New York University School of Law. He joined the staff of The Wall Street Journal in 1960 as a copy editor, later becoming Page One Editor. He served in various positions with the Des Moines Register over 11 years including Executive Editor, Editor, President, Chief Operating Officer and Editorial Chairman. He went on to serve as General News Executive for Gannett Co. and USA TODAY and editor of the Louisville Courier-Journal.

In 1988, Mr. Gartner became President of NBC News and served in this capacity until 1993 when he became Chairman and Editor of The Daily Tribune in Ames, Iowa. Mr. Gartner was for six years a member of the Iowa Board of Regents, and he is chairman and principal owner of the Iowa Cubs baseball team.

In 1997, Mr. Gartner was awarded the Pulitzer Prize for Editorial Writing for his editorials about community issues in The Daily Tribune.

Geneva Overholser is director of the Annenberg School of Journalism at the University of Southern California. Before her current position, she held the Curtis B. Hurley Chair in Public Affairs Reporting for the Missouri School of Journalism, in its Washington, D.C., bureau.

Overholser previously was editor of The Des Moines Register, a syndicated columnist for the Washington Post Writers Group, an editorial board member of The New York Times, ombudsman of The Washington Post and a reporter for the Colorado Springs Sun. Under her leadership, the Register won the 1990 Pulitzer Prize Gold Medal for Public Service. She is a fellow of the American Academy of Arts and Sciences and the Society of Professional Journalists and was a Nieman fellow at Harvard. She served on the board of the Pulitzer Prize for nine years, the last year as chair.

Overholser was named “Editor of the Year” by the National Press Foundation and “Best in the Business” by the American Journalism Review. She co-edited the book, The Press as an Institution of Democracy and authored “On Behalf of Journalism: A Manifesto for Change.” Overholser wrote a blog for the Poynter Institute Website and a regular column for the Columbia Journalism Review. She spent five years overseas, working and writing in Kinshasa and Paris.
Herb Strentz

Herb Strentz is professor emeritus of journalism at Drake University in Des Moines, Iowa. He was a founder of the Iowa Freedom of Information Council and served as its executive secretary from 1975 to 2000. In 2004 he was named to the "Heroes of the 50 States, The Open Government Hall of Fame" of the National Freedom of Information Coalition and the Society of Professional Journalists.

His PhD is from Northwestern University and he taught at Bakersfield College, the University Kentucky, and the University of North Dakota before going to Drake where he served as dean of the School of Journalism and Mass Communication from 1975 to 1988.

Strentz also worked as a reporter for The Fresno Bee and the Associated Press in Albany, NY, and worked part time and during the summers for The Minneapolis Tribune and the Des Moines Register and Tribune Company. He is the author of "News Reporters and News Sources," which was published by the United States information Agency in Spanish, Chinese and Arabic.